The most well-known Greek mythical legend goes that one day, Cupid/Amor, the god of love, used one of his arrows to cut the fingernails of his mother Venus. As her nails fell from Mount Olympus into the sacred Indus river, they metamorphosed into Onyx as they were believed to be divine. In ancient Greek, onyx means the nail of a claw or finger.

Onyx is relatively uncommon in nature. It is the striped, semiprecious variety of agate with white and black alternating bands. The name comes from the Greek onux, meaning "nail" or "claw", referring to the mineral's color, and it was used by the Romans for a variety of stones including alabaster, chalcedony, and what is now called onyx marble. The name onyx is properly applied only to the agate variety. Other varieties include Sardonyx, with white and red bands. As with the other chalcedonies, onyx forms from the deposition of silica at low temperatures from silica-rich waters percolating through cracks and fissures in other rocks. Natural onyx comes from India and South America. Onyx is popular for carved cameos and intaglios because its layers can be cut to show a color contrast.

In ancient times Onyx was believed to have a demon imprisoned within that would awaken at night, sowing discord, especially between lovers. Nowadays, strength-giving Onyx is a protective stone for dark nights and lonely places. Taking you forward to view the future, it is useful when a relationship needs stabilizing or when it has passed its sell-by date and needs releasing. Effective in past-life work for healing old injuries and physical trauma affecting the present life, it anchors the flighty into a stable way of life and imparts self-control. Onyx is thought to increase regeneration, happiness, intuition, instincts and also believed to decrease sexual desire and helps to change bad habits.

Onyx has been treasured for centuries across Asia, North and South America and traded as a precious stone in all parts of earth. With its unique milky white agate formed by natural rhythmic crystallization contrasting its background color, this stone possesses a strong character and mystical aura, fascinating mankind ever since. From miners to merchants, Onyx has shaped the fate of many people, as a precious trading commodity and inspired an abundance of mystic tales across cultures.

The Chinese also believed in the power of this stone, as black onyx is considered very protective and grounding for its holder used especially in Feng Shui. This precious stone is known for the energy of strong support, stamina, and determination to help one’s persevere. 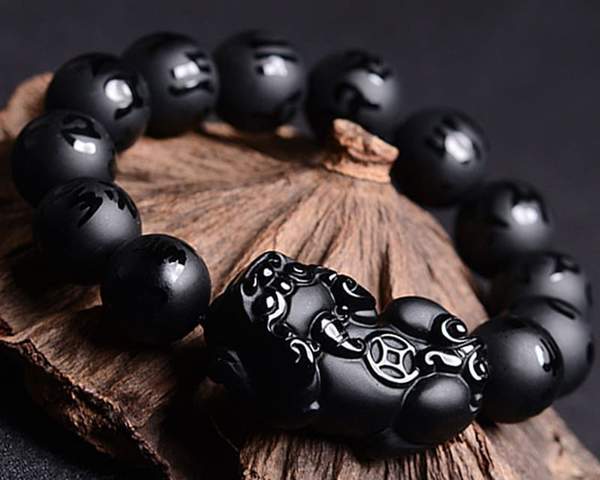 It is said to teach the wearer to rely on own powers; which is then often crafted as traditional wealth bracelets and amulets. 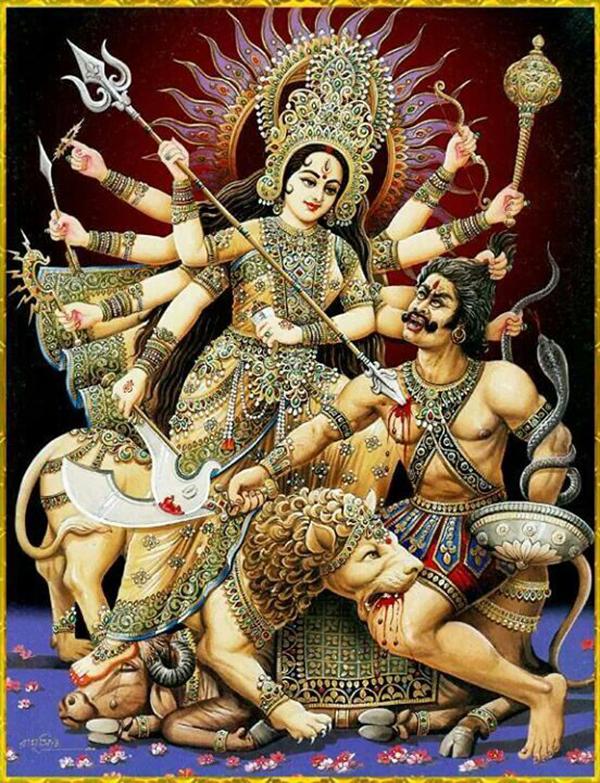 In ancient Indian and Persian tales Onyx is referred to as a protector from evil. The Indian gemologists describe onyx as a protector for harmonious relationships. The stones’ close union and yet strong contrast between the layers of black and white are considered symbolizing for the love between two people.

Even in astrological terms; it was believed Onyx to give power and courage and assigned onyx to the star signs of Leo and Capricorn, which were known as the most ambitious signs according to the Zodiac at that time.

All of our products are designed and developed in house, from the initial sketch to prototype.   Cutting stones to reveal the inner, layered beauty which takes millions of years to form, requires high precision and meticulous skills from our craftsmen in Germany. Each cut results in a unique stone face.  It is then sent to our Swiss partner who carefully crafted every mechanism of the watch. Our close collaborations are built on experience and expertise in different areas alongside a shared passion for detail. 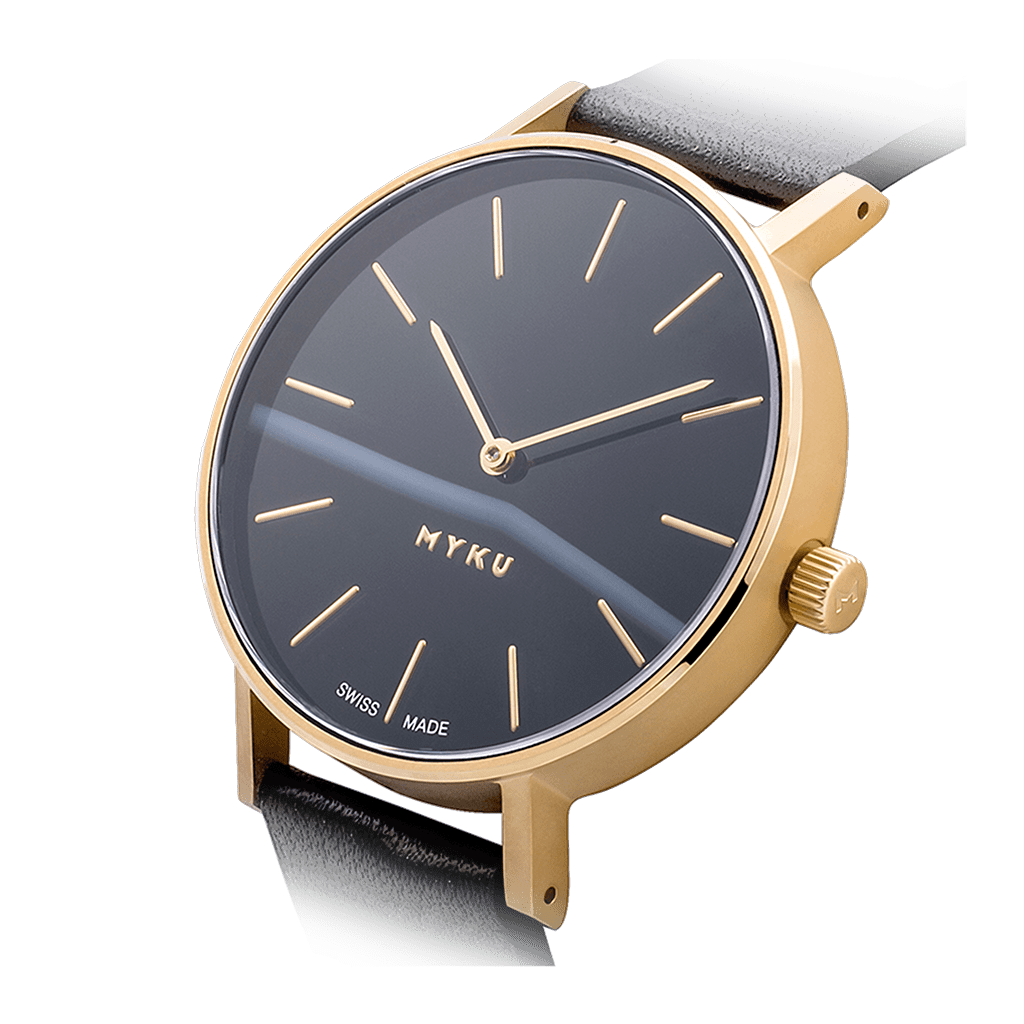 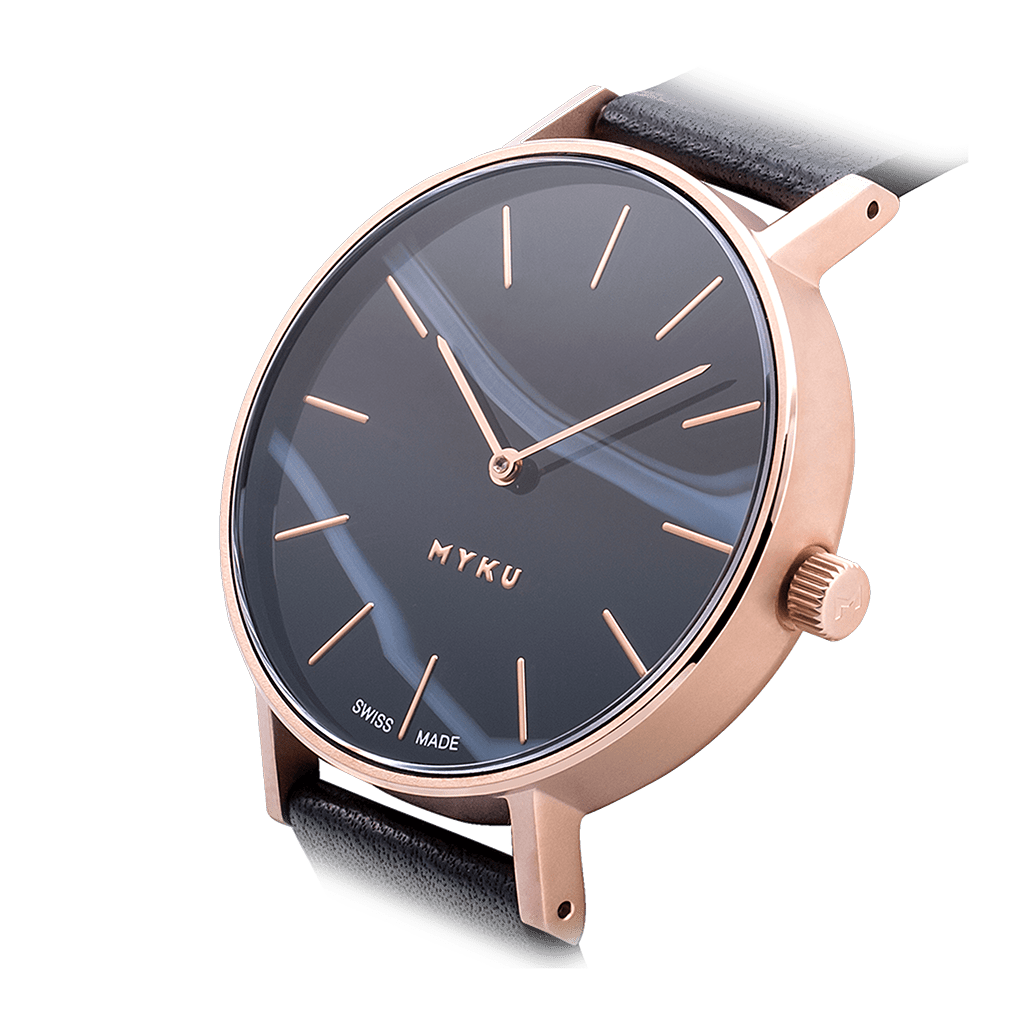 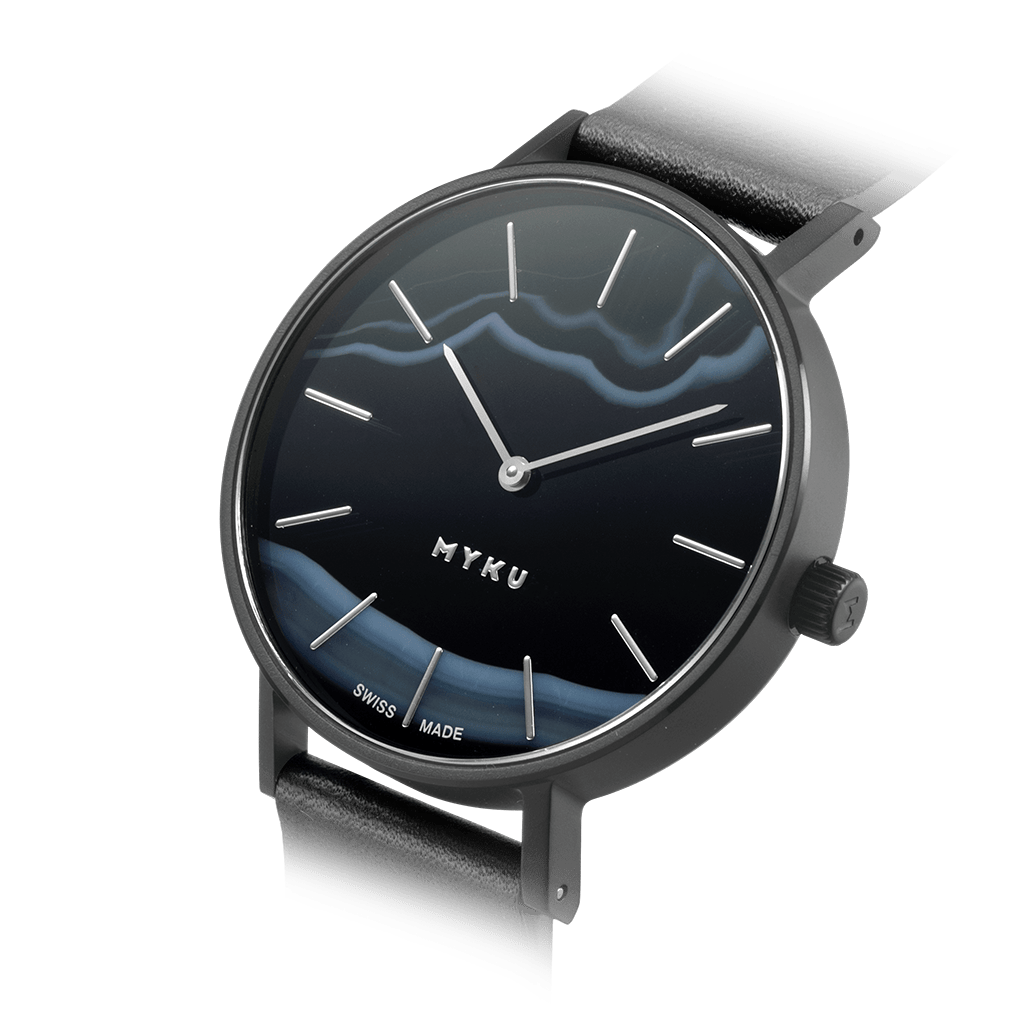 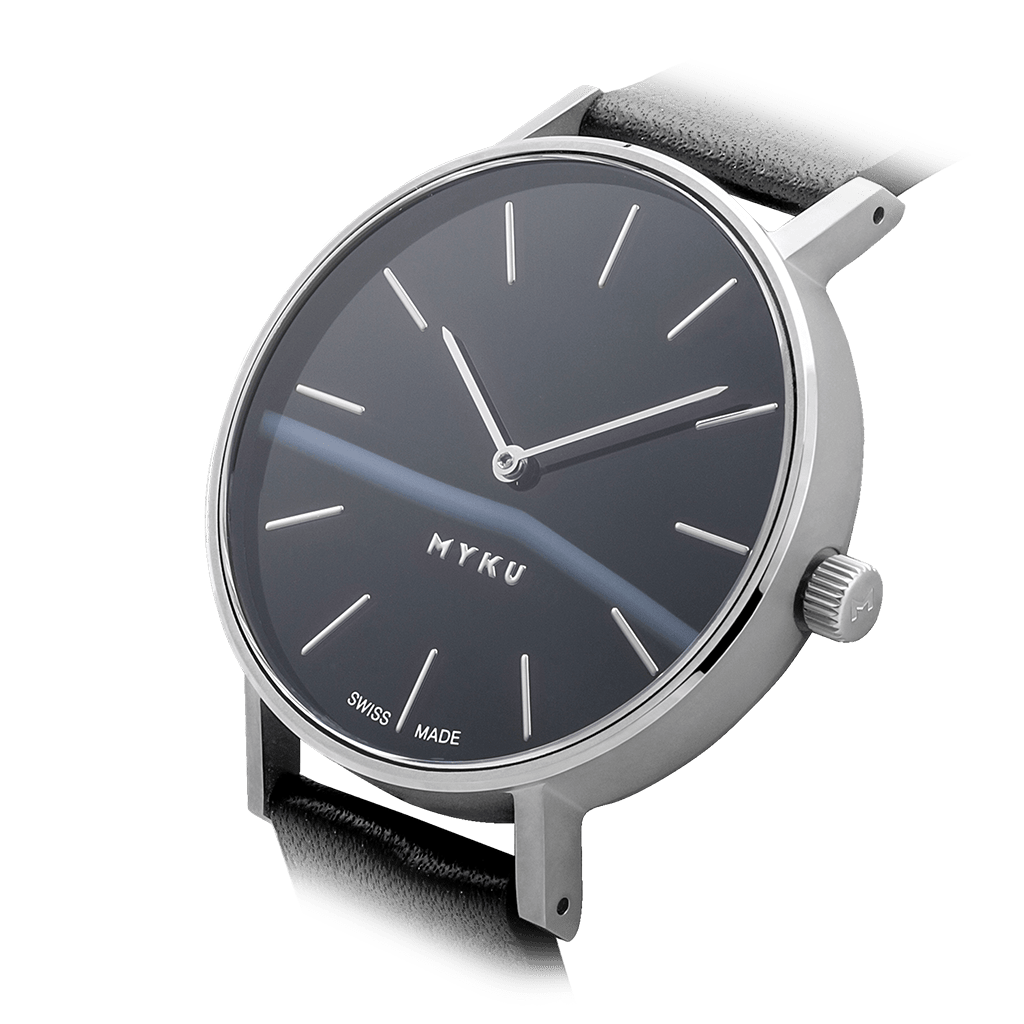 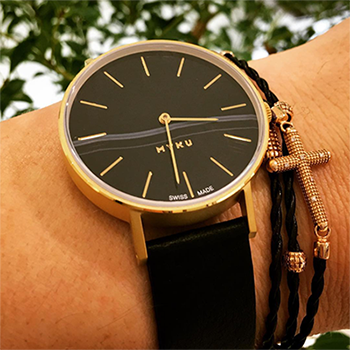 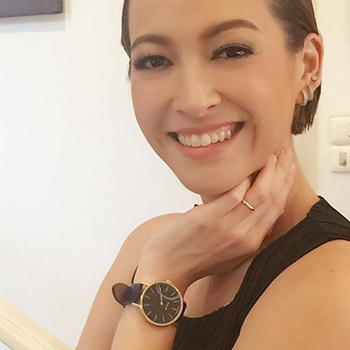 Got my MYKU and am thrilled with it! Well designed, unique and great value for such a lovely timepiece." 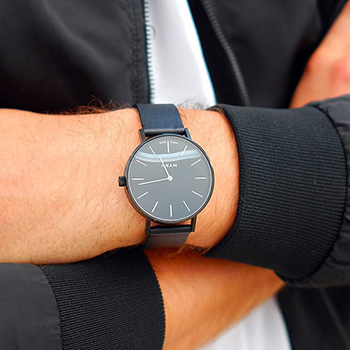 The craftsmanship is uncanning and every piece is unique. It is probably one of the prettiest a accessory I've ever owned."